Its the 3rd day of the year 2012 and I've finally decided to officially launch my Food Blog. This, happens to be my First review. So i thought i'll take up a restaurant which i really liked, so this one is a Pizzeria Called "TANTO" in Auroville Pondicherry. 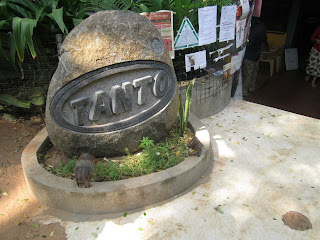 This place was about 15Km from where we stayed. The road to this pizzeria is not all that good, but very very scenic with canopies covering the roads at times. Situated in a man made forest in Auroville, its a large place with a small stream flowing near the pizza baking oven, sadly we guys couldn't get a place to sit next to it. It was quite a large place, with at least 25 tables, the entry to the pizzeria is spectacular, the oven is right at the entrance. 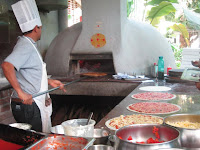 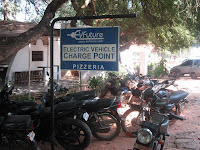 Another fascinating thing about this place was its eco friendly factor, so all you Pro Eco guys out there, you'll give additional brownie points to them for this reason.


So, after checking out the entire place it was time for us to settle down and as we're a gang of around 12, we decided to sit in the corner of the restaurant. Finally it was time for us to order. And here's where my actual review starts.
The menu card was nothing spectacular, but it was informative.Very. I chose a pizza called as "Earth", now why on earth would i order this? Well, I was having a vegetarian meal with a watermelon juice for the side drink. Maybe that's why. I placed the order and waited.
Meanwhile, my friend ordered for a dish known as "SeaGlobal" and true to its name, it consisted of mainly squids,fish,prawns,parsley. For a sea food lover I'm sure it would look very welcoming. As a by watcher, to me it looked like a carefully assorted by a trained hand worthy of being in the museum! The prawns looked intimidating and eerily alive. The dish was accompanied with french fries, although i'm a huge fan of the fries, these somehow didn't seem to grated to perfection (so there goes the marks for presentation). 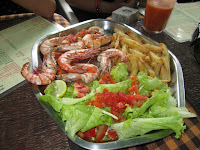 This is what the dish looked like. I wouldn't really be able to tell you about the choice of watermelon juice with this dish, but my friend didn't seem to complain and rather was quite happy with it. So i'm guessing its not too bad.


My dish took a good 20 minutes for it to arrive. The presentation was immaculate. And justifying its name, it really was earthy looking. The piping hot pizza was making all the more hungry. And the pizza was colorful. And I love colors, so it looked very inviting. 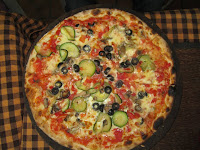 I'm not a big fan of the thin crust, but after seeing this one on my table, i really didn't mind. And another thing, the pizzas come in 2 sizes, medium and normal. The medium is 8inch and the normal is 12inches. And true to my appetite I ordered the12inch, but after seeing the pizza I must admit, it was quite big. Nevertheless, i took my first bite, and I found the end of the slice i.e, the vertex of the pizza was quite heavy with the cheese, so I did a fine balancing act while having my first piece. I must say, the tanginess of the olive and the hot jalapenos made my first bite a memorable one, and there was a generous amount of cheese topping. Although, i found the sauce a little bland, but i think the other flavors made up for it. But, be sure eat the pizza fast as the crust tends to get very raw, rough and wooden after a point.

The pizza mainly consisted of : Tomatoes, Cheese, Zucchini, Mushrooms, Olives and Jalapenos.
The pizza was quite filling and my advice to you would be to go for the 8inch if your appetite isn't that big. The ambience was quite rusty, we ate outdoors, and although there was the menace of the flies and they were in huge numbers, my friend got quite irritated with that actually, but the flies didn't bother our table much, so i wouldn't complain. There also was a dog (i'm assuming it was a domesticated dog at the place), it was giving my friends company and the dog was quite persistent, it didn't leave until they fed it, some bits and chunks and its persistence was duly rewarded. So, the ambience as such was not a michelin star(ish), but they didn't claim that either. So, i would say it had a fun element to the ambience.


Tantos is not on the expensive side, a normal sized pizza would set you back by around 250Rupees or approx. $5. Thus, a meal for 2 would be around 600-650. No alcohol is served.

So now for the moment of truth, the "Lick-O-meter", if you don't know what it is, its here.
Purely based on the food and the presentation, I would give it

This was Blogged listening to What I've done, Time of Your Life, Where is the love, 21 guns, Wake me when september ends.

Vivek Karat
Well, i am someone who knows a thing or two about food and places where you get great food. I love tasting new cuisines and am not too scared to experiment.I'm very particular about my food and stemming from this, i aspire to be a professional critique although as a vocation. Additionally, I'm also an aspiring photographer